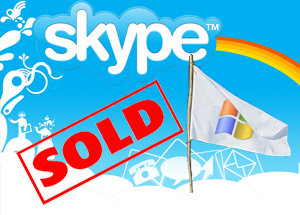 The rumors that appeared overnight have turned out to be true. Microsoft has confirmed the purchase of Skype for $8.5 billion in cash.
Microsoft has been very clear in that it sees Skype’s technology and services being applied across the board to both its consumer and business customers. That means enterprise customers will receive a new way to communicate over voice and video, but more excitingly, those who own an Xbox and Kinect will also benefit from its introduction, as will Windows Phone 7 owners.
With Skype now a wholly-owned branch of Microsoft there may be worries that the service could disappear from non-Microsoft platforms. But Microsoft has been quick to state that Skype will continue to be supported across all devices going forward. (Smart move here)
With guaranteed billions coming their way, investor group Silver Lake, who previously owned Skype, were delighted. Both Skype and Microsoft boards of directors approved the purchase and only regulatory approval is now required to finalize the deal.
Read more at the Microsoft press release

With Skype on virtually every device, the acquisition may be one of Microsoft’s best move in a while because it ensures Microsoft’s presence in the every day life of people with the desire to communicate. Even apple will have to deal with the pain of supporting one of the best applications for their products. Owned of course, by one of their biggest competitor in the software world.

Let’s just hope Skype continues with their free great service of video conference. The last thing we need is a greedy Microsoft wanting to charge for an occasional “Hello how are you” to aunt Inka in Poland. Hopefully they will implement it quickly into their products and make it grow. After all, the price of 8.5 billions was very high. Some argue that it was 4 billions over-priced. Don’t know about that, but they better make the most of it.
By the way, if you want to give me a call or add me to your Skype friend’s list, don’t hesitate to do so. Just click on the icon below:

This site uses Akismet to reduce spam. Learn how your comment data is processed.

My first Impression with Affinity Designer

With the latest update of Affinity Desig...

How did I obtained Polish Citizenship Confirmation

Color Pictures out of Black and White